John Akin has well over 20 years experience in the operation of treasure hunting equipment.

Although they both have decades of experience in their chosen fields, they just came together as a team this summer (2018), when John first contacted Gary. The two quickly became friends, and decided to make treasure recovery attempts on some of the hundreds of buried hoard locations that Gary has accumulated over the years.

Gary’s locations come from his private research of historical documents, so they include sights that have been long forgotten. Gary’s specialty is gold hoards buried by farmers and ranchers from long ago. Most of his sites have not been published in any books or magazines. He has hundreds of sites on file, and over 250 of them have a very good chance of recovery!

The team has made a commitment to integrity. Absolutely no searches will be made without permission from the landowner.

John has an amazing piece of treasure locating equipment, which enables the team to locate and pinpoint  ANY  hoard, usually within 15 – 30 minutes of arriving at the location!

Both Gary and John still hold down full-time jobs, which greatly limit their opportunities to travel and get “in the field”, but they hope to secure a sponsor that can pay their expenses and enable them to go “full-time” in their treasure recovery efforts. Any sponsor would be awarded with a generous percentage of recoveries.   The team is also open to recovering treasure for others for a percentage of the find. Simply pay their travel expenses up front when arrangements are made. Please contact them with requests.

As a hobby I’ve been doing historical research for over 40 years. My “specialty” is U.S. farmers and ranchers from the mid 1800’s through about the mid 1900’s.

The first time I came across a story of an old farmer who buried his gold and died without recovering it or telling anyone where to find it, my ears “perked up”. I thought, hmmmmm, “I’ll bet that happened a lot back in the days when lots of people buried their money instead of putting it in a bank. I decided to drop all other research and “specialize” in those types of situations.

Through the years I documented and filed away hundreds of cases where this happened. Some of the people who buried these hoards were known to the local “town folk” as hermits, misers, eccentrics, or recluses. Some of them were just ordinary people who just “didn’t trust banks”. Sometimes people lived where there weren’t any banks in their area.

I began to research each case one at a time, to see if a recovery of these hoards might be possible. Could they still be where they were originally buried?

I became familiar with the dusty back rooms of historical libraries and historical societies. I researched original land plat maps that showed where the original property was, to see if it was still privately owned “open” ground, or now under the parking lot of the local Walmart or other developed ground. County clerk record searches show who owns the property now so it can be pinpointed to exactly where the property is.

Through this research I found that about 70% of all the “lost treasure leads” that I had on file were what I classified as “non-recoverable” for one reason or another. Some of the reasons these leads were eliminated include, facts proved that a family member most likely already recovered it, the ground is now developed, the ground is now part of a state park or other government land, and sometimes the “story” was a complete lie (newspapers “back then” wanted to sell papers just as bad as they do today).

But …………………… after exhaustive research, I still have over 250 cases where there is a very high  probability that the gold coin hoard is still in the original place, and it is still on “open” ground, usually still farm ground! I call these locations my “Hot Spots”.

These sites can yield buried treasure worth millions of dollars.

Before I select any site for a search and recovery effort, the site must be confirmed to be on property that is still located on open, privately owned ground. (Original land ownership and plat maps records are searched to find the original site. Then a modern land records search is do  ne to see who now owns the ground.)

My “Business Plan”?
I plan to search as many of my “Hot Spot” locations as possible. These are locations which have very distinct probabilities that gold coin hoards are still there and are recoverable.

Remember that one reason that these hoards were never recovered is the fact that the only tools people had to search with “back then” was metal probes to pound into the ground hoping to get lucky, or picks, shovels, etc. Modern search technology and  equipment has come a long way since then!

My big problem has always been the fact that I never owned the technology to make serious recovery attempts on any of my sites.

After all, it takes a VERY long time to search every square foot of a large farm with conventional metal detectors.

All that changed for me when I met John! He has the technology and is an expert operator!

Be sure to read John’s bio below. You’ll see why we make a perfect team together.

Important: For my own safety I do not keep any files at home or on my computer. They have all be converted to digital and are in a bank safety deposit box. 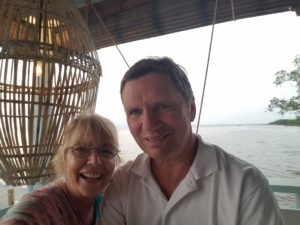 John’s interest in treasure hunting goes way back, but hunting for individual coins didn’t get him excited. He soon developed a passion for cache hunting.

John’s issue was the fact that he was limited on finding “fresh”, and relatively little known sites.

Over the years John has located sites that he is 100% confident that they contain gold coin caches, but none ended in a recovery for various reason.

He has also located numerous gold veins and gold bearing rocks (hot rocks), none of which contained enough gold to make them worth “working”.

Although none of his searches have ended in any major recoveries, he gained years of experience using his equipment and became an expert operator.

John’s passion for searching for buried coin hoards is just as strong now as it’s ever been!

In the past, John’s buried treasure leads came almost entirely from treasure hunting books. In other words,  he was limited in places to search, and didn’t have the research experience to locate more sites.

All that changed when he found Gary’s contact info online and gave him a call and made plans to meet.

Gary had hundreds of documented buried and lost gold coin sites, but no search and recovery equipment. John had the treasure hunting equipment and technology, but was very limited in places to search.

They turned out to be a perfect fit for each other and quickly became friends.